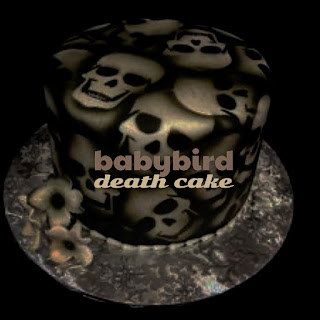 The next album from Babybird is available to pre-order now. It will be called 'Dead' (or possibly 'Death'), and is described as "an album of pop songs written while thinking about death" and "a happy album". The first full track to be taken from it is titled 'Death Cake', a song that offers a deliciously dark, funky treat. 'Death Cake' is available as a free download and can be streamed below...

'Dead' is the latest in a series of self-released albums available via Bandcamp. It comes in three different formats: a very special "mask" CD, a double CD set and a 3CD tin. These can be purchased now from Stephen's very own Bandcamp at:


'Dead' arrives just a few months after the self-released albums 'Cigarette Candle' and 'I Was Born Again', as well as the critically acclaimed LP 'Photosynthesis'. The UK tour is now less than a month away, and as well as the chance to witness Stephen Jones and his band in all their raw glory, there will be a range of exclusive merchandise available at these shows. As well as T shirts, a "Best Of" album compiled by Stephen, and vinyl copies of 'Photosynthesis', there will be a magnificent hardback book of lyrics on sale.