The new Babybird LP 'Photosynthesis' has been getting a fantastic reaction from critics and fans alike. Here are some of the reviews of the album, plus news articles, features and radio appearances.


Q Magazine gave the album four stars in this review... "Something solid... These songs arrive in a swarm but they sound splendidly isolated" ★★★★

NARC Magazine awarded the album five stars... "Unlike anything else you'll hear this (or any other) year, 'Photosynthesis is a masterpiece." ★★★★★  @narc_magazine 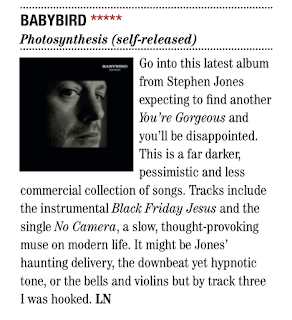 Long Live Vinyl awarded it 8/10, complimenting 'Beach  Grave' for it's "vigour" and 'Yeah I'm In Hollywood' as a song that "aims straight for the heart"... 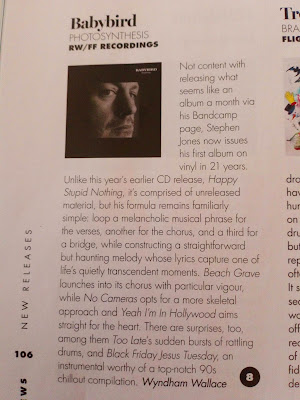 "Leave your expectations at the door and step into a whole new world of sounds..."
★★★★★ Another five star review, this one from the Manchester Evening News. 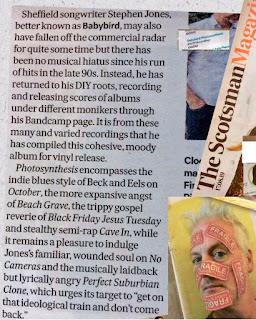 "The world is a better place for having him still actively making and releasing his music" said Brum Live in this review:
http://www.brumlive.com/album-review-babybird-photosynthesis/

MusicNews.com praised the album, commenting that "'Photosynthesis covers themes of, love, loss, and politics, with an eclectic sound to boot..." 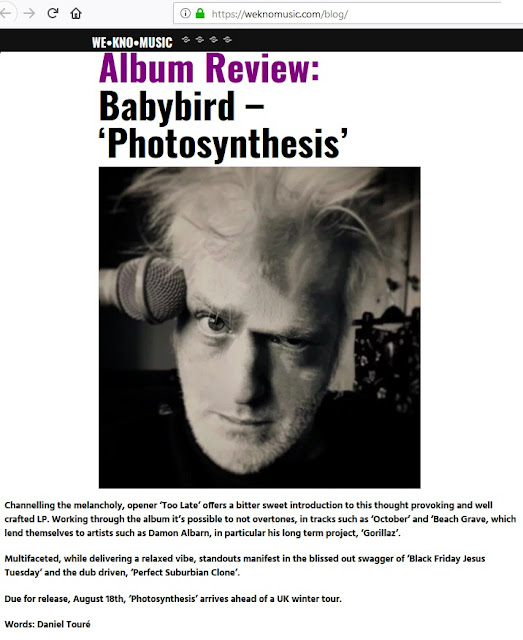 
Indie For Bunnies hailed it as a "A dark doorway to a restless and far from sunny world..." http://www.indieforbunnies.com/2019/07/19/babybird-photosynthesis/


"A very tight record that takes the listener on a journey. It's a mostly dark and introspective one, but it's definitely a journey worth taking..." the verdict of music website A Pessimist Is Never Disappointed http://www.apessimistisneverdisappointed.com/2019/07/too-late-brief-review-of-new-album-from.html


In a round-up written by Brian Bordello, eclectic music website Monolith Cocktail gave 'Photosynthesis' the thumbs up, calling it "an LP full of dark beauty and such bloody good songs. Drum machine beats and synth strings cradle the twisted musings of anti-escapism... A small dark masterpiece, a masterclass in songwriting"
https://monolithcocktail.com/2019/07/10/our-daily-bread-337-babybird-duncan-lloyd-the-martial-arts-palavas-paper-hats-quimper-and-the-top-boost/


"An intriguing yet confusing listen" was the mixed opinion of RGM in this review: https://www.rgm.press/baby-bird-%E2%80%8B-photosynthesis/review/


XS Noize had the exclusive first stream of the album:
https://www.xsnoize.com/exclusive-listen-to-photosynthesis-the-new-album-from-babybird-now/


Meanwhile, Louder than War featured the music videos for 'Cave In' and 'No Cameras' https://louderthanwar.com/watch-babybird-unveils-brand-new-video-cave/#.XQ3B68zwU88.twitter


'No Cameras' was featured in this new music round-up from Last Day Deaf here: http://lastdaydeaf.com/fresh-n-green-june-4th


Turn Up The Volume included 'No Cameras' as their Pick Of The Day: https://turnupthevolume.blog/2019/06/13/babybird-drops-darksome-no-cameras-reflection-from-upcoming-lp/


'Too Late' featured here on the Hype Machine
https://hypem.com/track/2vw0b/Babybird+-+Too+Late


"A lifetime of opinions and truths... Please leave your selfies at home and enter the brave complex world of Stephen Jones" ... 'No Cameras' featured in the latest new music round-up from Give It A Spin:

Over in Germany, Pretty In Noise featured 'Cave In' in this music round up: https://www.prettyinnoise.de/pinteressant-19-25-entdecke-neue-musik-aus-aller-welt.html/2

Over at music blogger Kendall Lacey's website, the are not one but TWO tracks from 'Photosynthesis' in his weekly Top 10.
https://kendalllacey.wordpress.com/2019/07/21/top-ten-songs-in-kendallworld-this-week-21-07-19/
Skope magazine were another site to feature both 'Cave In' and 'No Cameras' in their weekly music round-ups:
https://skopemag.com/2019/06/23/weekend-edition-skopemag-news-for-june-23-2019-1030-am-est


It also features in this music round up from Gazete Duvar: https://www.gazeteduvar.com.tr/kultur-sanat/2019/05/26/yerin-kulagi-opethten-beklenen-album-geliyor/


The site also included 'Yeah I'm In Hollywood' in another round-up here: https://www.gazeteduvar.com.tr/kultur-sanat/2019/07/21/kuzey-kutbundan-gelen-muzik/


Indie For Bunnies featured 'No Cameras' on their site here - http://www.indieforbunnies.com/2019/05/23/ascolta-no-cameras-il-nuovo-brano-di-babybird-che-anticipa-il-nuovo-album-photosynthesis/
"Slow and reflective, still with the trademark voice that keeps getting better even after all these years, this has some odd instrumentation, even moving into a dubstep moment just before the end..." 'No Cameras' reviewed at Is This Music? - https://www.isthismusic.com/babybird-5

In a brand new interview with The Mouth Magazine, Stephen Jones talks about life, music and 'Photosynthesis'. "The majority of the public like Ed Sheeran or Mrs Brown's Boys, whereas I like David Lynch and Joy Division – but I don’t see it as ‘bleak’. I have always seen it as absolutely uplifting. Melancholy doesn’t depress! It should make you feel brilliant..."
https://themouthmagazine.com/2019/07/16/babybird/

'No Cameras' has also been a hit with Chris Hawkins, who has been playing the song on his early morning show.
Listen again here https://www.bbc.co.uk/programmes/m0005vwb

Over in Canada, long-running indie show Cowboys and Indies on CJAM 99.1FM have been featuring various tracks from the album.

'No Cameras' made it into the show's monthly Indiessential Chart:
http://cowboysandindies.blogspot.com/2019/07/cowboys-indies-monthly-indiessential_2.html


Songs from the LP have also been enjoying regular airplay from OFI Monday's weekly radio show, as well as featuring on their mixtapes.
Listen to all available episodes at: ofimonday.show"An absolute pleasure to play such a top album by such a fine artist." https://www.mixcloud.com/djindiegroove/the-ofi-monday-podcast-the-one-with-the-glistening-helmet-plus-2-hours-of-quality-indiealt-music/