NEWS: In the Bandcamp charts, on the radio and in your letterbox... 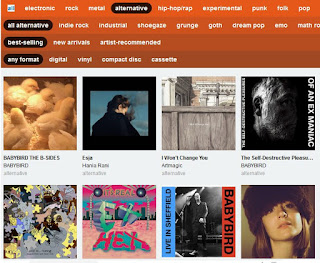 BABYBIRD - 'The B Sides' was recently the worldwide Number 1 in the Bandcamp Alternative Charts.

Not only that, but 'The Self Destructive Pleasures Of An Ex-Maniac' came in at number 4, and the Live In Sheffield album at number 7. Great to see the music of Stephen Jones featuring on one of the internet's biggest charts.

Elsewhere, these albums ranked high in other charts on Bandcamp, while the recent and acclaimed album 'Happy Stupid Nothing' is also still doing well.

The '95-19' collection features 41 tracks personally selected by Stephen Jones. The album spans from the early lo-fi material of the 90s all the way to the more recent material released via Bandcamp.

More of the limited edition 'Happy Stupid Nothing' gatefold CDs are back in stock, now available for just £8.99 at https://psychomafia.bandcamp.com/album/happy-stupid-nothing-2

In case you haven't heard any of the tracks from 'Happy Stupid Nothing', BBC 6Music played one of them again the other night. You can hear the stunning 'In Place Of Love' on Gideon Coe's show here: https://www.bbc.co.uk/programmes/m000470q

You can also listen to a Mixcloud radio special from RW/FF, which features classic Babybird tracks old and new played on various radio stations recently, including BBC 6Music, Regal Radio, The Vibe, OFI Monday, The Eclectic Storm, SMHU Radio, the You Total Cult podcast and others. Listen to the whole thing below.

The new and long-awaited (by Jones standards) Bandcamp album 'NOTPOP/Toothpaste For The Soul' is now completed and being sent out to lucky listeners very soon. Keep an eye on your letterboxes. A sneak preview of the tracklist and a brief snippet of music from it can be found at SJ's Twitter page here:

Stephen Jones has also revealed that he is currently working on at least TEN separate albums at the moment. It's fair to say that there is plenty more to come from Babybird this year, and in about a month's time there will be some even more exciting news to announce. Stay tuned...
2019 Bandcamp News Radio