ALBUM: The Pleasures Of Self Destruction 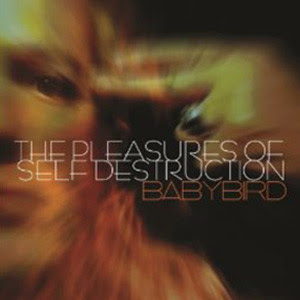 
Babybird’s second album with Unison Music was released 31 October 2011. Expect big explosive distorted brass and songs about things being just out of reach.

JESUS STAG NIGHT CLUB
This about a group of teenagers who
hire a jesus lookalike to organize a stag night in the north of england.
it goes wrong and the impersonator dies
during the night out, only to find out that he really is jesus.
Depp plays on this one.
BEAUTIFUL HAZE
this is about the feeling, the hit you get,
and the fear of scrabbling for life, when you’ve come off your
surf board and you’re flailing around under the waves,
trying to find the surface. the haze of beauty and fear.
THE BEST DAY OF OUR LIVES
meeting a girl, falling in love,
getting pregnant all within a day or two.
surviving the alcoholic fallout of
making mistakes when young.
I LOVE HER
this is simply about my daughter, any daughter.
putting down your vices, shredding that
last youthful ounce of selfishness
and concentrating on her 100%.
NOT LOVE
is about false sentiment. As in 500
days of summer.
xmas and birthday card
sentimentality…how t.v., corporations and the pop charts stole love
kidnapped it.
CAN’T LOVE YOU ANY MORE
double meaning. can’t love you any more
than i do
can’t love you anymore
its over.
dichotomy song. plot :
a couple are in a car are heading
towards a wall down a hill.
both their hands are on the brake.
if he apologies for last night they
live …. if he doesn’t they die in the car crash
DON’T WAKE ME UP
a narcoleptic song. if you see someone
asleep leave them, they’re dreaming about you.
good thoughts. so don’t
interrupt…leave them sleeping.
I’M NOT A KILLER
idea for this came. from any situation,
could be road rage, screaming at traffic wardens etc.
you’re not a killer, but sometimes,
just sometimes you could kill.
topical now the death penalty is being
discussed in parliament.
happy song.
WWW.SONG
idea was about stalkers and facebook.
and men grooming girls on the internet.
of course in classic babybird style,
its fleshed out, made catchy.
its another ultimate love song that I
specialize in…
how would you go for someone you
loved….would you kill for them
of course you would !!!!
A LITTLE MORE EACH DAY
pretty self-explanatory…instead of a
relationship declining which is real pop and t.v fodder
this is about loving someone
a little more each day
SONG FOR THE FUNCTIONING ALCOHOLIC
funny song about love and hate, job and
money, wife and kids.
trying to get out of yourself, ditch negative thoughts,
and get a grip you fucking weak man
THE WORLD IS OURS
simple
taking life back from its constraints
tonight the world is ours NOT THEIRS
REMEMBER US
remember the good days….be positive.
making this album and the last Ex Maniac,
in America, it’s really clear how negative the english are.
The American ‘have a nice day’ cliche is misunderstood.
they look at things different and being
a pessimistic british whiner
it was good to get a grip on real life
enhancing positivity.

As an intruder in music land, I feel utterly amazed to still be doing this… to be able to shove all the stuff I do into a bomb-blasted envelope with the mainstream stamp partially torn off, and left there hanging… just about dangling on for dear life. So thank you, especially to all you surfers, giggers, downloaders, buyers, followers, stalkers, lovers, haters, and fellow Babybirders


The Pleasures Of Self Destruction, the latest release by English creep rockers Babybird, is a balance of twisted, surreal imagery and angst powered arrangements, mixed up with soft and tender songs that can be anyone’s “song”. Veteran writer, musician, poet, novelist, Stephen Jones once again brings us new perspective, brilliant irony, and memorable melodies that rattle the world with a call for love, understanding, or the opposite of both. Thoughtful music for interesting humans. Signed to Unison Music Group, Babybird recorded their critically acclaimed album “Ex-Maniac”, which was followed up with a successful UK tour. Once again, Babybird has teamed up with Bruce Witkin and Ryan Dorn, the producers behind “Ex-Maniac” to create the all new collection, “The Pleasures Of Self Destruction”.


In his own words

“Almost love was a very early title, so themes around things being just out of reach and not quite being able to grab onto your own life. Control of your life slipping away. Trying to balance this with the endless pursuit for enjoyment and entertainment. The usual themes.”

“The songs are different from Ex-Maniac in that they are more epic. Big explosive distorted brass and strings giving it something more filmic”

“I tried to make it a bit more political even though I’m fully aware that political songs are the antichrist. So these songs are tampered without clichés.”
“There was lots of visiting dogs during recording. We had a white bird, a parakeet I think, called Bentley, who sat in the studio for Ex-Maniac. Bruce has four dogs, amongst them, one massive hound called Harry who wander round kind of in charge of the whole place. Kind of all feels very right.”

“The studio control room is where I used to sleep as the studio was then in West Hollywood. It’s now at Bruce’s. So I sit on the sofa where I used to sleep, sharing the room with Black Widow spiders, squirrels and crickets. Nothing really unforseen but this one cricket who is never seen but is sometimes louder than the music. Chirping bastards like a baby bleeding bird.”
“Pleasures” is all new and written over a shorter period of time. It’s the happiest I’ve been about an album. I think my work has always been political, but political in the sense of things that relate directly to people, not party political rubbish. Music is a great way to stick two fingers up to the constraints of society, to confront the false freedoms we are lead to believe we have. “The Demons” are the things I like to use to mix up my own personal experience with all the things I see first-hand or in the media. Add it to an insanely addictive tune, and then, there you are, you have the essence of Babybird. (punkglobe.com)

“On the new album there are some kids who get fucked up on a stag night run by a Jesus Impersonator. There’s one about a stalker. And me…. The Functioning Alcoholic Ha Ha!”  (punkglobe.com)

On love: “I’m always writing about protecting innocence. I’ve got two children, aged ten and five, but I was doing that protective thing before that. “Love is stronger than like, and ‘like’ is a word like ‘nice’. You would always prefer to love than like. Not Love is a good example of that: it’s about how love is packaged in greetings cards and was triggered by that film (500) Days Of Summer, where the guy’s job was to design those cards. (York Press)

“The idea behind the title is that everything that’s good for you can be bad for you too. Apparently playing video games can be as bad for you as taking drugs” (York Press)
2011 Album News