NEWS: 'Happy Stupid Nothing' review on God Is In The TV 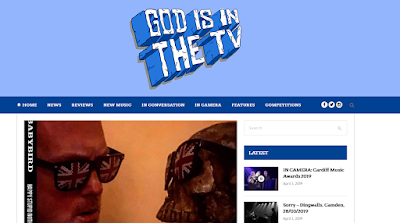 I love an artist who defies categorisation, someone whose approach requires thought and attention to gain the most from their work and Stephen Jones, as Babybird, is one such artist. Active since the late 80’s and with over 20 long players under his belt, this is a musician who I hold in the greatest regard, although I have to admit that while Stephen has carried on walking the line, as a fan it has become apparent I have lost my way. Now with this latest work, Happy Stupid Nothing, it seems he has drawn me back into the fold, something I am forever grateful for.

Opening to this album is ‘Feel‘, a slow but solid rambling tune, in which he sings “And I look into the sun knowing that it’s too bright, I was blinded for a second, but it feels like I’m alive, that’s how you make me feel.” Perhaps not quite who he wrote this for, but as a lost soul myself, I feel that he’s hit the nail on the head and won back another follower. But with this, some might say sentimental number out of the way, Stephen then embarks on what he does best, and with granite like chords opens the next, perhaps autobiographical, story telling, of someone who is ‘The King of Nothing‘, returning to a subject he first explored in 2017, with the self released ‘King of Nothing Parts 1 & 2‘. Then like a headwind, changes direction and with delicate notes and vocal, proceeds to the next number, ‘Fly‘.

As a listener of these wonderful tunes, you are mesmerised and sucked into the wonderful world of Babybird, just like the reader is drawn into the world of Alice in Wonderland. – Am I really likening Babybird to Lewis Caroll? Well I guess I am – this is joyful story telling for those who have been given the keys and realise how to use them. With the following numbers, ‘In A Place To Love‘, ‘Bonebox‘ and “The Greatest Thing”, we are offered a rollercoaster of a ride, going from skimming stones across a calm pond to heady climbs up the rail, then to a breathtaking drop as you descend through heady feelings of emotion and it becomes truly apparent to this listener, that I am back in the arms of Stephen Jones’s literary passages, and not just riding on his coat tails of 30 years song writing experience.

I opened telling of how “I love an artist who defies categorisation” and this is how this album makes me feel. It is not just a body of verse-chorus-verse, but like the songwriter’s catalogue of work, explores emotion lyrically and taste musically. To that end, the releasing of dance music as ‘Trucker‘ is also touched upon here, before recoiling like a snake into the more familiar genre of DIY alternative music. It’s reassuring to hear, in ‘I’m Not Done‘, that even though he experienced a heart attack following 2017’s People Do Stupid Things, ‘Part 3’ of which can be found here, his insatiable desire to create music still goes unwavered.

It might be said that Stephen is a giving musician, as in 17 numbers found here he offers his loyal fanbase a meal worthy of the finest feast and by track 12, ‘Vacuous‘, it does sound like the album is winding up, but then cheese and biscuits are brought out by the servers and the listener is given a further 5 tracks, combining tenderness in the delicate notes of “Love Life”, perhaps the story of the author’s love for his child. In some places on this album I might even liken the experience of hearing My Bloody Valentine, as some of the sound spaces do reflect similar passages to maybe a sleepier version of the gigantic sound servers.

Now a fully charged listener in the ways of Babybird once again, I can reflect that Jones and Co. have remained true to the Lo-Fi ethics that were first embraced, and with a fan base which includes Johnny Depp, contributor on 2010’s ‘Ex-Maniac‘, you can perhaps understand where this journey might take you. This is a wonderfully written and compiled album, thanks in part to label Psycho Mafia Recordings, it’s good to hear that Babybird are back where they belong, in the consciousness of the record buying public. Thanks Stephen.

Happy Stupid Nothing is out now on Psycho Mafia Recordings.