NEWS: 'Happy Stupid Nothing' 5 star review on The Grey Lantern 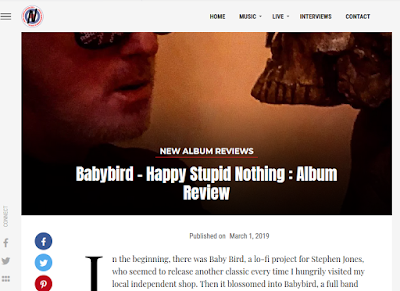 
In the beginning, there was Baby Bird, a lo-fi project for Stephen Jones, who seemed to release another classic every time I hungrily visited my local independent shop. Then it blossomed into Babybird, a full band project adding extra colour to the early tracks. And then You’re Gorgeous happened and the greatest cult crooner of our age was on
Top Of The Pops. Amazing.

As the years have passed, Stephen Jones has remained ugly/beautiful and if you head to his Soundcloud, you’ll see there has been no slow down in quantity, or quality.

After going down the DIY route for years, Happy Stupid Nothing sees some of the greatest songs from the last decade revisited on a label, Psycho Mafia, here’s hoping this gives his work more exposure as it is no exaggeration to say that this can stand up against any of the early classics.
Opening an album with a big love song might be p-o-p tradition but being Jones, the stunning Feel does not take the Disney route – ‘You’re a bomb in my heart, love splattered in the air’, it’s a James Bond theme pencilled by Richey Manic, like giving a girl a bunch of flowers with a book on how long it will be before they die. Emotive, open, honest. Brilliant.

The single King Of Nothing would be a chart smash in a perfect world, but once again, Jones points out that nothing is perfect – ‘I got messed up, took the wrong decisions’ over a killer pop beat that drills into your brain and never lets go.
In Place Of Love is a highlight, a tale of yearning ‘in this place of tears and laughter’, such fragility and such grace. If you are looking for musical sorbet amongst all this red meat, then The Greatest Thing is for you, a joyful love song ready to have festival crowds hanging ion its every lovely word. On the opposite side of this golden coin, I Am Not Here is a super ominous talkpiece, a rambling, chilling ambient piece that could provide the soundtrack after Major Tom hears his fate from Ground Control. Like a Fitter Happier for the Twitter generation, then.

Want something lighter? Try Football or Vacuous, but again behind the dancey vibes and singalong sections, there are more serious things under the surface – ‘Blow my brain up like a bulb’, is this a reference to taking in all the intelligence you can get or a reference to suicide? Jones sometimes throws up more questions than answers but that is what great albums are supposed to do and he’s a goddamn expert, still cutting after a quarter of a century.

Love Life is another honest look at the greatest of emotions and The Weight Of My Sin is a glorious kissoff, the purest of pop tones straight out of the McCartney songbook which builds to a magnificent climax likely to have you standing in front of your stereo and applauding it’s magnificence.

Happy Stupid Nothing is as hungry, unique and intelligent as anything Babybird has done previously and I guess releasing a masterpiece 25 years in is such a Stephen Jones move and let’s hope the deserved audience comes out to support it. Still gorgeous.