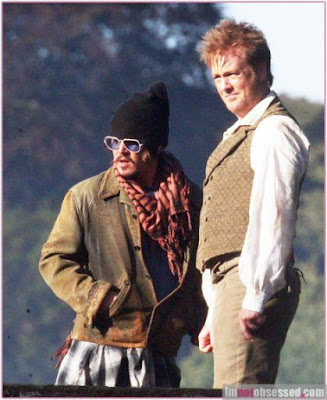 (From Consequence Of Sound)

Johnny Depp played Hunter S. Thompson and Edward Scissorhands, so no matter how many pirate or commercial Burton movies he makes, he will always have a pass with me. Even though it is my human duty to dislike pretty boys like him, his passion for the arts and his wealth of talent are unarguable, even when I am at my most cynical. But when a man has already conquered the worlds of T.V. and film, what next is there for him to do? Direct a music video for a mildly obscure British band for the block!

Yes, the man so many of us remember getting pulled through the bed in the first Nightmare on Elm Street, has turned his attention behind the camera to direct Babybird‘s video for “Unloveable”, where his looks matter less and he must rely oin his talent. As you can view below (Music Mix), Depp seems to be good at everything he tries, even getting artsy points for borrowing the plot from a story written before the LAST century (Ambrose Bierce’s 1890 short story “An Occurrence at Owl Creek Bridge”, later adapted into a Twilight Zone episode but I’m sure Depp is referring to the story.)

The only thing more buzz-generating for an artist than having a video directed by Johnny Depp is to have that video banned. Sheffield workhorses Babybird (of "You're Gorgeous" fame) have the singular good fortune of Depp's friendship, which led to his playing guitar on the single "Unloveable", and then directing the video. It's depiction of frontman Stephen Jones' hanging has met with some controversy, which can only benefit Babybird. And since "Unloveable" is a great song and "You're Gorgeous" came out way back in 1996, let's hope so.