'The Bad Book' by Stephen Jones 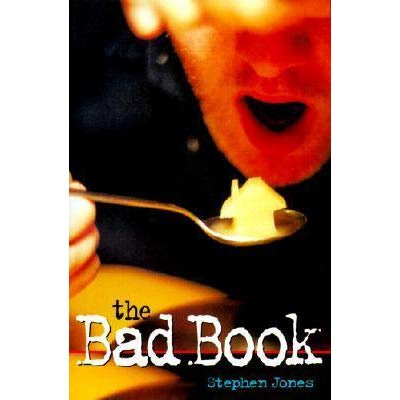 The Bad Book:
That was how it used it be, barefoot, on the edge of the razor-blade. Always getting into someone's bad books. Just being normal.
Hit had been happy as an eight year old. He didn't want to grow up. He was a sweet kid, but one that wasn't quite right. He had juvenile insomnia. He was somewhere floating between ME and e-number hyperactivity. Even the weird bulge under his eye didn't seem to worry him. He was just happy to fall off the edge of the world and get up again. But then his mother goes missing, and all of a sudden he has to be an adult.

'The Bad Book' documents a pivotal two days in Hit's bizarre life, an odd mix of his own fantasy, his father's seedy reality and a confused dark place somewhere in between.
It is a desperate and disturbing tale of one boy's fight to win back a normal life. To find his lost mother and keep tabs on his father, the man he suddenly realises he knows nothing about.
This striking debut novel is a unique exploration of memory and shock, showing how memories can dull the pain.....for short periods of time.'

Press Quotes:
"BETTER KNOWN AS MAVERICK MUSICIAN BABYBIRD, STEPHEN JONES HAS DECIDED TO TURN HIS DISTINCTIVE HAND TO WRITING NOVELS. THE RESULTS ARE ASTONISHING... VEERING IMPERIOUSLY BETWEEN MAUDLIN MONOCHROME AND EXUBERANT TECHNICOLOR, HE PROVES AS ADEPT WITH NARRATIVE AND METAPHOR AS HE IS WITH CHORUSES AND COUPLETS" (THE TIMES)

"BREATHTAKING IN ITS SIMPLICITY AND ITS ORIGINALITY" (THE SCOTSMAN)

"CRYPTIC, YET WITH MANY REFERENCES TO THEMES ALREADY PRESENT IN JONES' LYRICS, THIS COSSETED, WOUNDED LONER IN DYSTOPIA WILL COME BACK TO HAUNT YOU.. 'TIL INFINITY" (I-D)
2000 Books News Stephen Jones