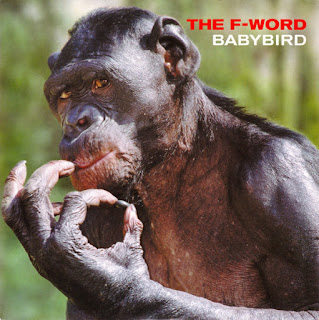 "LIKE THOSE SMALLTOWN MUSEUMS THAT JUMBLE EVERYTHING TOGETHER - STUFFED FOX, DOLLS' HOUSE, MOTH COLLECTION, NASTY OLD MAN - YOU NEVER QUITE KNOW WHAT YOU'RE GOING TO FIND LURKING INSIDE STEPHEN JONES' HEAD... MONSTROUSLY CATCHY AND FEROCIOUSLY IRRITATING" (NME)

"BIG, BAD AND STOMPING OVER INFERIOR WHINY TUNES ON A RADIO NEAR YOU" (SKY MAGAZINE)

THE F-WORD
(from www.thef-word.com which doesn’t exist anymore)
…the kids decide to leave the city park. they ditch their radio in the trashbin, leaving it on to kill off the batteries. it’s four o’clock and the DJ is trying to save the world with a joke, then another, then another, till you don’t know where you are anymore.

but the abandoned radio will be safe. as soon as the kids leave, it’ll get picked up by the park keeper, who’ll stick it in the electrical recycle dump, with the toasters and the kettles.
the kids return half an hour later with a petrol tank from the garage, they pour it into the slot on the dumpster, and flick in a lit cigarette. stepping back there’s a rush of inhaled air, and then a small explosion, and the slot begins to roar fire like a burnt out tank.

the kids run round it screaming like fruitcakes, holding their air pistols and homemade capguns in the air. it’s like kuwait all over again, but the kids never saw that. for them it never happened. it wasn’t even part of their memory, unless it had been on sony’s new dreamcast Bomb Iraq III. but this, torching the recycle bin, now that was the real thing. this is war.
but then they hear a sound. something is terribly wrong. It sounds like the radio’s still going, and when they calm down, they can hear a voice above the crackling, this is so-and-so with the f-word…”I wanna get high. I wanna get low…”

they look for the sound. at first they look at the mouth of the burning dumpster, and then at themselves. the big kid counts the heads to make sure they’re all there. but there’s one missing. he can’t see the runt, anywhere, the one they normally dangled and dropped in the recycle bin.
but with a closer look it’s okay. there he is. the little f*kwit screaming his head off along to the words, ”Cuss my mother and I cuss my dad…”

the big kid runs over and gags his little brother’s mouth with the cup of his gassy hand, ”Hey shut up you little prick”. but he keeps it up, still singing through the big kids hand, louder and louder…
…the dumpster’s mouth moving, moving it’s black metal lips, singing the words. then the song ends, and with one almighty firey cough it pukes out the radio, knocking the kids on their backsides…and there it is, melted and smoking, dead as a chewed up doughnut, on the concrete.
the kids run out of the park, screaming that scream that could ever be blind panic or absolute joy.

Review from The Bad Pages:
"At first impression this a simple rocker with heavily distorted guitars, a real bastard groove and a direct-in-your-face refrain wrapped up in a surprising fuzzed attitude. So it’s definitely a grower and the ideal record to annoy your neighbours with – it begs to be played extremely loud. And as time would later tell, it is also a fine representation of Bugged.
The two b-sides ‘Just a Little’ and ‘Beat the Boys Up’ recapitulates the simple groove/heavy refrain of ‘The F-Word’, but none of the two were ever a personal favouritet here. Perhaps its their lack of an unmistakable catchy tune or their intentionally simplified, almost monosyllable appearance that keep coming at you.

CD1 comes with a Steve Osbourne remix of ‘The F-Word’ which might have a cleaner big beat-eque production and is easier to dance to (sic.), but in spirit is pretty much identical to the album-version (without the trademark guitar) and therefore rather uninteresting. But then again, if this version actually gave you a chance to listen to Babybird when clubbing, I’d go for it. CD2 came with the great promo video for Bad Old Man (Why not ‘The F-Word’?).
A very limited edition 10” white label with the Osbourne remix and ‘One dead Groove’ (also produced by Osbourne) was sent out to DJ’s and radio stations – probably in the hope gaining some unbiased response to this very atypical Babybird song." 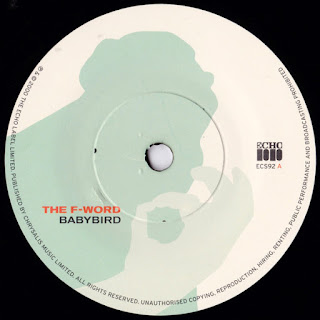 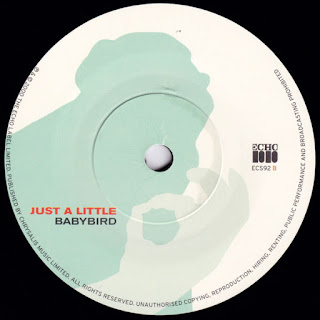 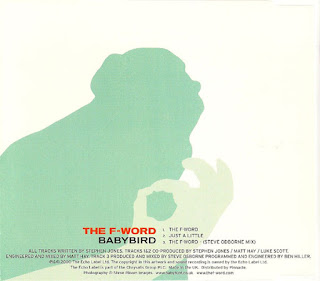 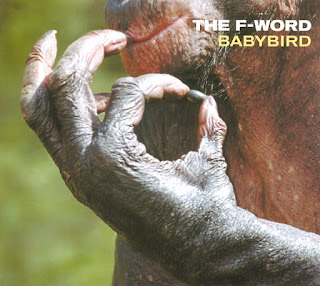 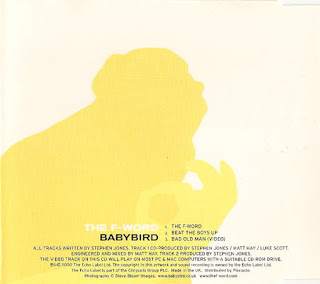 "The F-Word" was later used as the theme tune for Gordon Ramsay's television series of the same name.
2000 EPs SINGLES TFI Friday Videos