INTERVIEW: ‘I’ll sing about love till I’m 45 and fat’ (Independent) 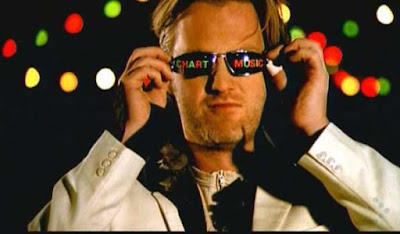 Stephen Jones is a saucy lyricist who says he’s never written about sex. But as Matthew Collings discovers, his band, BabyBird, are a mass of powerful and ironic contradictions

Stephen Jones used to be a performance artist. For 10 years, he was in a theatre group called Dogs in Honey, doing things such as crouching under a table chanting the names of consumer products while a video monitor relayed silent images of a mouth speaking.

The group, which was led by Jones, toured the country, existing on dole money and Arts Council grants. He claims the average turn-out for their shows was eight people, with his mum and dad often making up a quarter of the audience. He would cake his face and hair with horrible brown goo, as a comment on nuclear waste, and his Dad would help comb it out after the performance.
Today, his life is a lot more upbeat, what with being a pop star and a sex symbol. Nowadays when he performs, girls and boys rush the stage and shout things at him. “You’re gorgeous!” they cry, because he is – 32 years old, blond and handsome, always sexily unshaven, always in a suit, and because that’s the name of the tune that made him and his recently formed band, BabyBird, famous.
“You’re Gorgeous”, a song about a pounds 20-an-hour model posing for a sleazy car magazine photographer, was a Top Ten hit last autumn, entering at No 3 and remaining in the charts for a full 15 weeks before finally being deleted. He performed it on Top of the Pops and now everyone knows the chorus line. Richard Maddeley mimed it on This Morning, and a black gospel choir sang it on the BBC lottery program.

The album from which it was taken, Ugly Beautiful, is still selling strongly, and a new single from it, “Candy Girl”, with the refrain “It’s fine and dandy when you lick my candy”, has just been released.
Jones certainly is a saucy lyricist, although he says he has never actually written about sex. “Sexuality, maybe, but not sex,” he says. “And those two songs aren’t about sex in the way pop songs usually are. There’s a recurring line in the song, after the licking line, that goes ‘And I don’t mean that rude’. And I don’t. It’s about TV – eye candy. It’s about using language in a different way. You can listen to it and work it out but it’s fine if you don’t. I don’t mind.”
And “You’re Gorgeous”? “It’s an anti-male song,” says Jones. “It’s about role-reversal. The words describe how the man might feel if it was him in a bikini with his legs apart on the bonnet of a car being snapped for 20 quid.”

By some strangely unbreakable cosmic law, artists can be rock stars, but rock stars can’t be artists. When rock stars make art, it’s always bad, whereas when artists or art students move into rock, it’s often good. It’s all that surrealism and irony they learn. But BabyBird is a strange case on its own. Jones seems to be a uniquely new kind of performer – not quite at home either in art or pop but too good to be categorised simply as a novelty act.

He mixes cabaret mannerisms – the constant suit, his crooning voice, the band’s melodic, effective, unegotistical playing (no guitar solos or instrumental wigging-out of any kind) – with a genuinely menacing stage presence. His performances are legendary for his audience baiting, the way he half encourages hecklers and half hates them, and then suddenly steams into them and starts shoving them and shouting at them if he’s in a mood, or if they insult the guitarist. He writes songs that are aggressive and often sick-humoured, but tender at the same time.

He writes about what it might be like to yearn to be a woman instead of a man, in “Man’s Tight Vest”, or to be a poor person in Manchester breaking into houses and setting fire to cars (“Too Handsome To Be Homeless, which takes a careless quote from Michael Portillo as its starting point). “I Didn’t Want to Wake You Up” is about someone you love dying. (“It didn’t really happen,” he explains – “I was just trying to imagine it.”)

Other titles include “Jesus is My Girlfriend” (about the invisibility of God), “Plane Crash Christmas” (“Down came the plane/ into our little town/ thank God we were were away/ on our holiday”, “Fuck You Father Christmas” (a threatened Christmas single), “45 and Fat” (a parody of Coca-Cola’s “I’d Like to Teach the World to Sing”) and “Sea Gullaby” (“Down by the sea/ please don’t be sad/ bury, bury, bury/ bury your Dad”.)

Was it hell being a performance artist? Jones certainly seems embarrassed talking about it now. “It was small scale,” he says. “It was a long time ago, and it was mostly just being very poor. Anyway, people’s idea of performance art is a man sitting in a bath of beans on stage, or cutting his arm off for effect.” Behind the embarrassment is the fear that talking about his background as an actor might take away from his achievement as a songwriter. It might make him seem merely clever, instead of clever and soulful too.

But it was during the long years of under the table chanting that he wrote all the music for the Dogs in Honey act. Soundtrack music was something he could do, even though he had no musical training. He just played cheap keyboards, guitars and drum machines, and an impressive range of home- made instruments fashioned from washing-up bowls and bits of string and elastic bands into a four-track tape recorder bought with an Arts Council grant in his bedroom in Sheffield.

He didn’t innovate bedroom recording. Lo-fi is quite common now, and there are whole rock careers – in America especially – based on the freedom and rawness of lo-fi. But these are cult indie rock acts, not chart toppers. Jones brought a weird new smoothness to low technology.
He started recording songs, and he had 400 of them taped after about six years. He has released 80 of them so far. The music is startlingly rich and layered. He doesn’t seem to be able to write a tune that isn’t riffy and poppy and snappy, even when it’s spooky or sad. And he doesn’t seem to be able to sing badly, even when it’s in a hundred different voices and tonal ranges and accents, from full-on nightclub crooning to eerie choirboy warbling, with rap and hip-hop and easy listening somewhere in between.

He wrote for himself as a cure for boredom, a pastime while touring, with no idea of trying to do anything more with the songs. He just played them to friends, who eventually persuaded him to try his luck with the pop industry – a world he knew nothing about. He spent two years being turned away from record companies because the songs weren’t considered commercial enough and the words were unpleasant. So he formed a simple plan to release them himself – five cheaply produced albums, with 20 songs on each album, over a year. A man at Chrysalis Recordings gave him just enough money to start his own company, BabyBird Recordings, and finance pressing and packaging.
The albums came out, in limited editions of 1,000 (he didn’t think he’d be able to sell more than a couple of hundred) one every couple of months – Bad Shave, The Happiest Man Alive, Fatherhood, I Was Born a Man, and one more, Dying Happy, still to come this spring. Each package included artwork designed by Jones.

It was funny, ugly, anti-pop imagery produced with the aid of his girlfriend, Alison Levy, a mortuary photographer, strangely enough. Jones posing with an all-too-human naked beer belly, or with his face wrapped in a microphone lead, or covered in shaving gel and slices of cucumber, or the old brown goo from the performance days. Included in the package was a voting form so that whoever bought the album could send in their votes as to which tracks should make it on to a proposed “Best of BabyBird” compilation.

Almost with the first release, the plan was a success. A recording contract materialised and a band was formed. He started touring and working with a producer on re-doing a collection of the songs, with the band, in a high-production studio. After that, it was Top of the Pops all the way – new clothes, taxis and restaurants every night, and getting chased by teeny boppers wherever he went.
Will success spoil the anti-popster? Will he start getting more careful and stop bashing up his audience, cursing the record business and calling Peter Andre names? Will he stop being, well, serious?

Jones says “You’re Gorgeous” and “Candy Girl” are both very serious songs behind everything. “I don’t think people are stupid,” he says. “I think people see through things that are frivolous. And I don’t think my lyrics will ever change.”

He still has a lot of old songs to put out, and he plans to get down to some new writing soon. But even if it’s never quite as good again, it will have been a good ride
1997 Interviews News Press