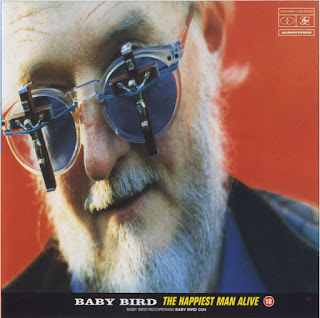 All songs recorded on a 4 track recorder no bigger than a vcr. No casio keyboards, no bellow-operated jazz synthesisers, no calor gas amplifiers have been used in there recordings. My attitude to resourcefulness-dictated-by-powerty never quite ran to stretching elastic bands over a washing-up bowl; though this technique, however tempting, is probably closer in spirit to babybird than to musicianship.
The happiest man alive is quality control on the grandest scale imaginable

"BABY BIRD IS HALF BEAST AND HALF SONGWRITER. HE IS WHOLLY A FORCE OF NATURE. BUT HE IS NOT THE BEATLES" (INDEPENDENT ON SUNDAY)

"RAW BUT COMPLETE, ABRASIVE YET MELODIC... A COMPELLING AND GENUINELY ORIGINAL NEW SOUND" (THE FACE)

"IF THIS IS THE COMPETITION, THE REST MAY AS WELL GIVE UP NOW" (SHEFFIELD TELEGRAPH)

"...an oblique sadist of spectacular talent. The Happiest Man Alive has an entire central nervous system of its own. It's a Frankenstein's monster of an album, gruesome and miraculous, stitched together from what would appear to be fragments of a dozen different psyches lodged inside one head." - Melody Maker

Brinkley, milkford, thymesley,
Gueastpont, gurton, stockmill,
Colesden, bullsdock, bouysea,
Swold – some of r. mcdonald’s
And b. king’s favourite places,
Where romance is still
Available. Just grab an an-to-b
german car and fill it with
cheap Russian gas. Rest your
size 42 TAIWANESE air-cushions
on the dashboard, drop a 3-hole
Blackburn brick on the
Accelerator, and hotwire your
way beyond the city limits of
invisible usa. On the way, take
time out to Polaroid the out-
skirts: a big yellow m, 3 red k’s
and the neon black tick
that swivels on the night-time
sodium orange-lit baseball cap.
Get the kids to stick the photos
on the rear window, slip the
golden Labradors a sleeping
pill, and drive beyond the
artificial fog.

Soon the sky regains her
colour, and the road is bright.
fuck nurofen, fuck alka selzer,
fuck anadin, the green grassy
aspirins, we took only minutes
ago, are working
With wd40 sticking pigskin
glover to the wheel.

Forgettable cars drive back
into the city, all the leather-
palmed and naked-knuckled
men wear peter cola virtual
reality sunglasses. The city’s
artificial fog is as thick as
scented dung, and the jesus
sunshades put bright-bright
light in their eyes, as they
highspeed the city-way home.

They pick up the glasses with
five ecu toll. Little plastic
ones for kids come free. They
close their eyes and see a man
nailed to a plane, with no
engine. They smile. As the
history of flight, from that
point unfolds, on tv retinas.

Meanwhile. We have arrived –
where swallows, humpbacks,
hedges and red phoneboxes
stand still under sea clouds.
And hailstones and snowflakes
fall like scones and double
cream. And we covered in
red, white and blueberries
blocking every hole with
sweetness.

As the car skids off the road,
we go through reels of
pleasurable suffocation – then die.
The happiest family alive.